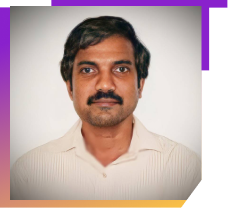 He has done his M.Sc and Ph.D. in Nuclear Physics from the University of Calicut and M.Sc in Accelerator Physics, from the University of Manitoba, Canada. He works mainly in the area of design and development of particle accelerators and instrumentation for associated experiments, including radio-frequency accelerating structures, control, and data acquisition systems, digital and radio frequency electronics modules.

Dr. Ajith Kumar initiated the PHOENIX project by designing a parallel port-based computer interface for teaching physics and engineering in 2005. His dedicated efforts in developing open science hardware for teaching science led to the latest development of [ExpEYES] (https://expeyes.in/).

ExpEYES -An open-source science lab, is currently the most affordable tool for learning science by exploring and experimenting which uses python for data analysis and visualization.

For the past several years he has been involved in promoting Free Software tools in Education. Has been pursuing academic community to include Python in their syllabus and has written a book 'Python for Education'. Dr. Ajith is involved in teacher training programs and has helped thousands of teachers to have hands-on experience with computer interfaced experiments and to take their first steps in the world of Free Software and Python.

Dr. Ajith is retired from IUAC in FEB 2021 but the scientist and educator in him will never retire. He has continued his work promoting science education and scientific temper through his new project scischool.in.

Catch his keynote at this year's conference. Get your tickets now!!